Agricultural-Raffia is a thing of the past

Disadvantages Of Trellising With Raffia On CEA (Controlled Environment Agriculture) And Open Field; ¡HORTOMALLAS! Always The Best Alternative To The Agricultural Rafia

When growing vegetables it is often necessary to provide a good support system for our plants, whether we are a backyard grower that likes to have fresh food produced at home, or a large farmer with many hectares, our plants need us to provide good support for their fruit loaded branches. HORTOMALLAS  is a vegetable support system that replaces the old support with agricultural  raffia.  With horticultural netting even heavy fruits like watermelons and cantaloupes melons are be fully supported by the trellis mesh, which provides great strength and durability.  Support netting works well also will all kinds of tomato seeds.

Raffia is a synthetic raw material widely used in the textile industry where it is commonly used in the form of thread,  obtained by the extrusion of polyolefins; a polymer derived from petroleum, and is used to replace the Jute (scientifically known as Corchorus capsularis) a fibrous plant, of the family of Malvaceae.  This evidences the fact that agricultural raffia was was not designed specifically for the farm field, and can cause many problems and generate large economic losses.  Trellising today with agricultural raffia besides requiring much more labor has other serious disadvantages compared to tutoring with plastic mesh netting.

SOME OF THE MAJOR DISADVANTAGES OF USING AGRICULTURAL RAFFIA ARE:

• Mechanical Transmission of Phytopathogens:
With HORTOMALLAS the horticulturalists prevents any accident or human mistake at work like pruning and harvesting (both actions require handling a cutting device like pruning scissors) could endanger crops for when a strand of raffia is cut accidentally while providing plant support, it is likely that all plant will fall and break, creating a loss that multiplied by the number of plants and while we have our culture, could add up to many thousands of dollars or euros per year just for creating a trellis system with raffia instead of HORTOMALLAS, the later being a system of nets that even if cut in one strand, will remain upright and provide the needed plant support for the fruits being grown .

Finally we could talk about costs of the products themselves (besides the fact that agricultural raffia requires 3 times the amount of labor to be installed than trellis netting) because with raffia it is necessary to change the product every growing cycle,  and that much of what we use is unable to reuse as cracks forming folds that is made, allowing bacteria, viruses, fungi and even insects take shelter, there needs to be replaced or making investments in disinfection chemicals besides having a very low resistance to sunlight compared with HORTOMALLAS.

IF YOU ARE LOOKING FOR MORE INFORMATION ON SUPPORT RAFFIA CLICK 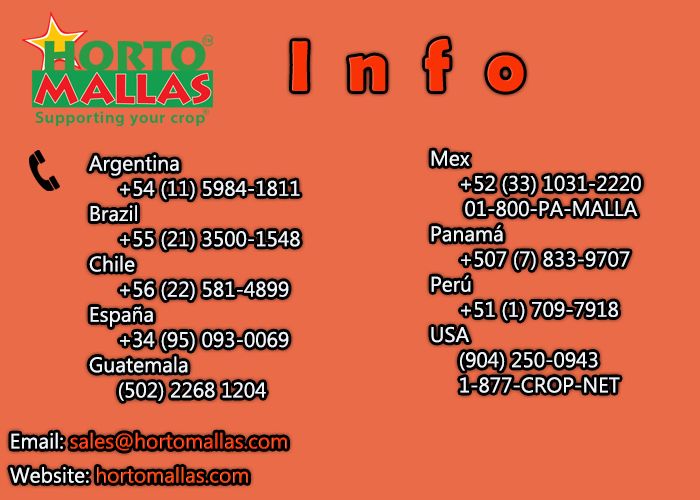